Even after the best part of two and a half thousand years, we can’t get away from Plato. His dialogues still have a shaping influence on modern thought, including on science fiction. It is interesting, for instance, that Jo Walton has a couple of books out recently, based on Plato’s writings. She isn’t the first; Peter Ackroyd has also used Plato as the basis for one of his rare excursions into science fiction, though the result is, frankly, one of his worst books. This review of The Plato Papers first appeared in Vector 207, September-October 1999. 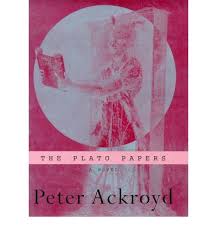 For too long, I suspect, Peter Ackroyd’s talent for pastiche, his ability to get under the skin of a variety of literary figures from the past, in both novels and biographies, has tended to obscure his true subject. Though the characters may come across so vividly, forget them, they are not important. Ackroyd is writing primarily about London. Novels such as Hawksmoor or English Music or The House of Doctor Dee and biographies such as Dickens or Blake or The Life of Thomas More are really hymns to London in its various guises and at different times in its life. Those novels, such as First Light or Milton in America, which take him furthest from the metropolis are also his weakest.

This slight book, really no more than a novella, is also about London, but at too much of a remove. What we have, in fact, is a story set some 2,000 years in the future. Society has undergone some massive though unspecified collapse and after an extended Dark Age has slowly re-established itself, though on very different lines. This book tells the story of Plato, an orator in this far future in a world that seems to have modelled itself upon ancient Greek lines, and to represent an idealist rather than a materialist take on the world. This Plato’s beat is London, and his subject is the Age of  Mouldwarp, the name given to the period from around 1500 to 2300 which precipitated the crash. Very little is known about Mouldwarp (and because of their anti-materialism, few people other than Plato have any interest in investigating their past), so Plato tries to put together a coherent picture from minute scraps of knowledge. Parts of a book entitled The Origin of Species have survived, and the torn title page reveals it was written by Charles D—; this is obviously a work of fiction, quite likely a comedy, by Charles Dickens. Some lines by (T.S.) Eliot must be the work of George Eliot who, other clues suggest, was a black minstrel.

It is obvious that Ackroyd is satirising our world, and Plato’s ‘Glossary of Ancient Terms’ is occasionally very funny (‘economics: an ancient science devoted to reducing all phenomena to their smallest and most niggardly point. Hence “to practise economy” was synonymous with “miserliness”.’), but the targets are too easy, the jokes too weak, the structure of the book with its persistent dialogues between extraneous but not clearly delineated characters acting as a sort of Greek Chorus too insubstantial. The city itself never appears, and so somehow the characters never seem to have any life because they have no context.

Only once does the book come alive, when Plato mysteriously visits his past, our present. Here, briefly, Ackroyd gets to grips with giving us an outsiders perception of the world we see today, and one can’t help feeling that this was his real intent with this whole book, but it is over too quickly and we are back in an unvisualised future. There is a figment of plot — this Plato, like his namesake, is tried for corrupting the youth of the city — but since we have never been made to care for any of the characters, we cannot care about the outcome of the trial. Somehow, I don’t think Ackroyd really cared either.