My leisure reading this year, as an escape from the science fiction I’m contractually obliged to read, has been roughly split between spy fiction and historical fiction. Of the latter, two books stand out not because they are among the best of the bunch, although they are, but because there is a curious congruity between them.

One is set in the late-18th century, the other in the early-19th century. Each consists of a first person narrative by a child who is alienated from their society by reason of their person: one is female, of stunted growth and ugly; the other is black with a disfigured face. Each gains their eventual status by ability in art and interest in science.

The novels are both named for their narrators. Little by Edward Carey is the story of Anne Marie Grosholtz, born in poverty in Alsace in, as the first sentence of the novel tells us:

the same year that the five-year-old Wolfgang Amadeus Mozart wrote his Minuet for Harpsichord, in the precise year when the British captured Pondicherry in India from the French, in the exact same year in which the melody for ‘Twinkle, Twinkle, Little Star’ was first published. 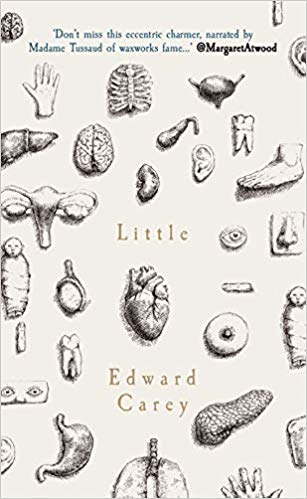 That enjambment of oddly disconnected detail is typical of Carey’s distinctive style. I have read and enjoyed two of his novels before this, Observatory Mansions and Alva and Irva, and though this new novel doesn’t have the same perverse air of unreality the writing has much the same curious quality. In this instance, though, the novel cleaves close to historical reality. Little Marie, who never grows above five foot, goes while still a young child to work as a housekeeper for an eccentric doctor in Berne. She becomes interested in his work, and through her preternatural abilities as an artist starts to make a contribution to his work in the study of body parts. So much so that she goes with him when two visitors, Jean-Jacques Rousseau and Louis-Sebastien Mercier, persuade him to go to Paris. She plays a part in helping Doctor Curtius in setting up a business displaying wax heads of famous Parisiens. For a while Marie is taken up by one of the minor princesses in the Royal Family and spends a year living in a cupboard at Versailles. Then comes the revolution; Marie barely survives, and after struggling to pull together what remains of her and Doctor Curtius’s business, she eventually leaves for London. There, at some point after the end of the novel, she will become Madame Tussaud.

It’s a marvellous novel, full of curious details, vivid characters, snappy lines, all helped out by Marie’s own line drawings as provided by the author himself. Although this is a fairly straightforward historical novel it still has an air, familiar from Carey’s other novels, of being situated at a slight angle to reality. Yet at the same time it conveys absolute conviction, you get a sense that the young Madame Tussaud must have been exactly like this.

The other novel, which seems to parallel Little, is Washington Black by Esi Edugyan. Like Carey, Edugyan has written a couple of novels before this, though in this case I haven’t read them. I get a feeling that I should.

Also in apparent parallel with Little, the blurb on the back of my copy of Washington Black says “Inspired by a true story”. This, however, is the only reference to such a “true story” anywhere in the book. There is no author’s note to provide context, no hint of such a story in the acknowledgements, none of the quoted reviews make any reference to such a source story; so I really don’t know what to make of this claim. I am inclined to doubt it, though that does nothing to gainsay the quality of the novel. 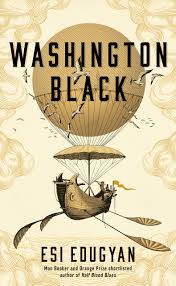 Washington Black is ten when the novel opens, which makes him a few years older than Marie, but he is even more disadvantaged: he is a slave on the Faith Plantation on Barbados. At the time, around 1830, slavery on the sugar plantations of the British West Indies was even harsher than in the southern states of the USA, and Faith Plantation has just been taken over by a new owner who is particularly harsh. But Edugyan doesn’t spend too much time spelling out the familiar iniquities of slavery. The new owner’s brother, a tall, thin man known as “Titch”, has also arrived. He has a sort of soft, liberal sensibility that makes him uncomfortable about slavery, though he doesn’t act on this discomfort. However, Titch is also a naturalist and would-be inventor, and his latest invention is a balloon-powered flying craft. Wash, small and light, would be an ideal assistant in his experiments. The fact that Wash is sharp, a quick learner, and has untapped artistic ability, cements the relationship, particularly when an accident with the gas being used for the balloon explodes and permanently disfigures Wash’s face.

When a visitor to the plantation commits suicide in Wash’s presence, Wash knows that as a slave he will get the blame regardless of what actually happened. So he and Titch escape aboard the flying craft, which almost immediately ditches in the middle of a storm. There begin a series of highly coloured picaresque adventures, aboard ships on illicit business, encountering the underground railroad in Virginia, being chased by a slave catcher, heading deep into the Arctic wastes where Titch wanders off alone into the snow. Edward Carey’s novel sticks pretty close to historical reality, but the way that the language is used suggests a heightened reality; Esi Edugyan writes a careful, factual prose, but the story she tells is full of the wild action, coincidences, chance meetings and extravagant settings of an early-19th century melodrama. In both cases, I find it fascinating that the style and the story seem at odds, yet work so well together.

At a later stage in the novel, Wash falls in with a noted naturalist and his beautiful daughter. Wash’s ability as an artist earns him the chance to illustrate the naturalist’s new book, and his interest in science helps him devise a way in which an exhibition of sea creatures can be staged in which the creatures are live rather than dead. It was at this point that I found myself wishing that, like Carey, Edugyan had found some way to include Wash’s drawings in the book.

Washington Black was shortlisted for the Booker Prize, a worthy honour that I don’t begrudge it in the least; Little seems to have slipped by almost unnoticed, though I think it is at least as good a novel. Together, the two make for an intriguing and remarkably satisfying pairing.