On Saturday evening we finally got to see Arrival (insert usual and deserved superlatives here). On Saturday afternoon, I came across a review of the film; I haven’t sought it out again, I haven’t linked to it, because something so wrongheaded doesn’t deserve the link. At one point the reviewer said, in so many words, the subplot about the daughter is unnecessary but at least it’s not sentimental.

Well, he’s right about it not being sentimental. Otherwise …

The most important decision that Louise (Amy Adams) makes comes right at the end of the film, when Ian (Jeremy Renner) asks if she wants to make a baby. Her silent assent is the emotional and intellectual climax of the film. Because at that moment she knows the entire course of her child’s life, she knows that she and Ian will split up, she knows how her daughter will die. The fact that she does agree is not simple determinism (though there is a perhaps necessary strand of determinism in both story and film that makes me uncomfortable), it is the moment that we truly know how much she has been changed by the “weapon” of the Universal Language that the aliens gave her. Her choice is the recognition of the way that the language folds all time into the same moment, so her child’s life will always be with her, the sorrows but also the joys, and not as memories but as real and accessible experience.

Her meeting with General Shang (Tzi Ma), which enables her earlier self to make the phone call that prevents war, shows us that she has learned how to use the “weapon”. But it is her decision to go ahead and “make a baby” that shows us how thoroughly she has been changed, how much the Universal Language has transformed the world that she now inhabits. 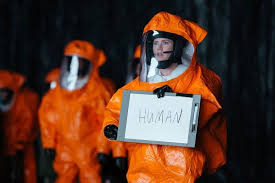 Put simply (and therefore, inevitably, crudely and inaccurately) the basic underlying idea explored in both story and film is that the language we use affects the way we perceive the world. In any language there are concepts that are essentially untranslatable, because they represent a view of the world that is not shared by the speakers of another language, and as such perceptions do not map one upon another so the words to express them cannot map from one language into another. In an alphabetic language like English, there is a constant building-up of linguistic thought: letters build into words, words build into sentences, sentences build into paragraphs, and so on. This is necessarily chronological: the first letter of a sentence unavoidably precedes the final letter of that sentence, there is a distinct time lapse between one and the other, and in that time we can and often do change the word we set out to write, the sentence we set out to speak. In other words, the thought that our speech expresses is not whole until the utterance is complete.

In the story, the alien script is described as “a doodle of script, vaguely cursive” and “their writing appeared to be logographic”[*], logographic would make it something like Chinese or ancient Egyptian pictograms. In the film (one of the few instances where I think the film really does outshine the original story) their script is a circle around which a series of blobs and curlicues accrue. The reason I like this filmic version better is because the circle is a whole, without beginning, without end, and the one lesson we need to learn from their script is that each circle expresses a whole thought all at once. There is no development of an idea, there is no chronological movement from first letter to last letter, the thought has to be entire in the very moment it is expressed. It is an achronological language.

The central strand of the film is told chronologically, from the arrival of the aliens and Louise’s recruitment by the military, to the moment that the aliens leave. It is told chronologically, because all of this occurs before she has mastered the Universal Language, and therefore before the language has shaped her mind to perceive past, present and future at will. Everything else in the film, that is the entirety of her daughter’s life, and glimpses we are given of her subsequent renown, is achronological. Of course, at first we don’t know that.

The film opens with a montage of scenes that recount the daughter’s life, from birth to death. And because we have been trained to read films this way, the automatic assumption is that this occurs first. When we next see Louise, as a lonely academic rattling around in a big empty house, the impression is of someone in mourning, of someone living through the existential emptiness after the death of her child. The sudden brief, vivid scenes involving the daughter, Hannah, that occur seemingly at random through the rest of the film, therefore look like memories. This impression is reinforced by the fact that the moment of transition is often accompanied by a close up of Amy Adams’s face shown sideways across the screen as if she has been asleep or unconscious. Do we trust this, or is it just a dream? There are frequent dreamlike elements within the film, such as our glimpse of the team making their way to an encounter with the aliens while apparently walking upside down. Though it is worth noting that the only certain dream sequence in the film is also the only point at which we see one of the aliens clearly without the confusion of cloud. All that is real is seen through a mist of uncertainty.

The language of film is at least partly responsible for this confusion over whether we are seeing the past or the future. Ted Chiang’s story uses tenses in a clever and original way to control our reading of chronological sequence in a different way. Denied the flexibility of tenses, a linguistic device that film lacks, the director, Denis Villeneuve, had to make creative use of the one temporal device that film language does allow, the flashback and flashforward. But he used them in a way that subverts our normal reading of these devices. What is actually the future shown out of sequence appears to be the past simply because that is what we first see, and the language of film has so shaped our view of the film world that we invariably assume that what is shown first comes first unless we are specifically told otherwise. Villeneuve avoids that explicit statement to the extent that I have seen reviews of the film that continue to believe that the daughter’s death occurs before the arrival of the aliens. (And while we are on the subject, I maintain that the Arrival of the title refers to the arrival of daughter Hannah, practically the first thing we see, rather than the arrival of the aliens, which we do not actually see.)

Of course there are clues to the fact that Hannah’s birth occurs after the aliens have left. The first one I picked up (there could well have been others) was when Hannah drew a picture that she titled “Mummy and Daddy talk to animals”. The picture shows two human figures, and below them what appears to be a bird in a cage. When Louise and Ian meet the aliens, they have with them a bird in a cage. Later we see the same scene reproduced in plasticine, with something that looks very like an alien heptapod. Such suggestions are unequivocal only when presented like this; within the context of the film they are oblique and easy to miss.

The most explicit statement of this comes only late in the film when Louise realises the atemporality of the world when perceived through the Universal Language. In three quick scenes, Hannah asks her mother for a term, like “win-win” only more scientific, but Louise can’t recall it; in the military encampment around the alien craft, Ian casually refers to “zero-sum”; back at home, Louise calls after her departing daughter, “zero-sum”. It is a very brief moment, and it is played almost for laughs (certainly it is wittily done) and I suppose it could be read as a coincidence, but what we are seeing in perhaps the only way film language allows, is Louise’s consciousness moving fluidly between times. 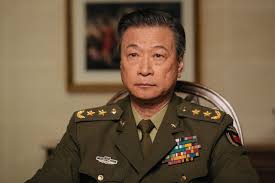 Throughout the film to this point the more Louise engages with the Universal Language the more brief inserted glimpses of her daughter we have had, though we have had no sure way of interpreting them other than as dreams, hallucinations, memories or premonitions, the usual grab-bag of what film commonly allows. But now that term, “zero-sum”, is the first piece of information carried from one time into another, the first actual connection that shows how the “weapon” of atemporality can be used. And having conveyed that message across time, Louise is now equipped to meet General Shen at a reception, learn from him his personal phone number and exactly what she said in an earlier phone call, then go back in time to use that information to prevent a war. At that precise moment the alien craft disappear, not because of the threat or even because the threat has been lifted, but because that one phone call was all the proof they needed that their gift had been received.

And since that atemporal movement between the later meeting with General Shen and the earlier phone call that prevented war is the explicit resolution of the plot strand involving the aliens, why does it seem so difficult for some people to accept that the same atemporality affects the daughter’s story?

Ah, but this is only the sense I have got from one viewing of the film, I feel there is so much else I must have missed. I need to see it again, and again …

Edit: a different but congruent take on the film is this wonderful post by Maureen Kincaid Speller.

5 thoughts on “Time of Arrival”