‘Let’s go left,’ Cadogan suggested. ‘After all, Gollancz is publishing this book.’

I knew about this novel long before I read it, or indeed anything by Edmund Crispin. Maureen kept quoting the line about turning left at a junction because Gollancz was publishing the book. It was a knowingness that amused me. But not enough to make me pick up any of his novels and read them.

Then Maureen re-read this book, and said it might amuse me. So I read it, and there was the famous scene. But by then the self-referentiality of the book was well established. Not long before, when Fen and Cadogan had been locked inside a cupboard, Fen spends the time loudly proposing titles that Crispin might use for his next novel. Indeed, before the story even starts, there’s a note:

None but the most blindly credulous will imagine the characters and events in this story to be anything but fictitious.

We are never in any doubt that this is not a slice of real life but fiction from beginning to end. Although Oxford, where the story is set, is very accurately described, there is otherwise no attempt at realism. Crispin remains true to the manners and patterns of crime fiction throughout the book, but the self-conscious fictionality allows him free rein with coincidences and idiocies.

The initial set-up is exactly the sort of lunacy you expect to find in detective stories of the period. An old woman with a pathological fear of being murdered, has only one living relative, a niece who spends all her time travelling abroad. The old woman doesn’t approve of her niece’s gallivanting, so she writes the sort of will you would only ever find in a crime story. If the niece doesn’t return to England to claim the inheritance within six months of the old woman’s death, then her fortune is divided equally between five strangers picked for the most trivial of reasons. The lawyer handling the will after the old woman’s accidental death sees a way of profiting from the unusual arrangements by killing the niece when she returns to Oxford at the last minute, but then things go wrong.

It’s the sort of artifice that you sort of accept in a crime story only for the pleasure of seeing which strings the author will pull and in what order. But Crispin’s regular nods and winks to the reader, the confiding way he tells us this is all made-up tosh, somehow makes the artifice less of an obstruction. We don’t have to bother with whether we believe any of it or not, and just get on with enjoying the mechanisms of the plot.

And the plot proceeds by Crispin piling coincidence upon coincidence with a glee that is infectious. Fen and Cadogan are sitting in a bar when they are joined by a complete stranger who just happens to be one of the key players in the plot; then later the two are sitting in a cafe and mention one of the other plotters that we have not met yet, and she just happens to be sitting at the next table. Every time someone appears, we know that it is another cog added to the Heath Robinson machinery of the plot, but the construction is itself a wonderous thing. To an extent, I suppose, Crispin is taking the piss out of the traditional detective novels of the period (the book was first published in 1946, the pre-war golden age of the detective novel was already settling into cliche), but it still works as a detective novel in its own right.

Two other things I noticed about the book: one minor, one intriguing. The minor is that we only once, and then only briefly, see through the eyes of Gervase Fen. Always, he is observed from outside. The viewpoint shifts restlessly throughout the novel, there are moments when each new scene, no matter how brief, is seen through the eyes of a new character. But Gervase Fen, the still centre of the whole thing, is always observed from outside. Then I realised that this is the case in practically all classic detective novels. Holmes can only be seen from Watson’s perspective; until he becomes so familiar that we do not need the service, Poirot is observed by Hastings. Wimsey is never in the first person, neither is Campion. Because the detective is the mystery; we cannot know how the detective sees and thinks, because then we wouldn’t need the detective. So we slip behind the eyes of Gervase Fen only once, at the climax, when the case has been solved and all we need is an impressionistic sense of one brief, dramatic, dangerous moment.

Even so, I almost missed noticing that we were seeing what Fen saw because of what that moment is.

The villain has been chased to a funfair on the outskirts of Oxford. In one last desperate attempt to delay capture, he leaps onto a roundabout. Fen follows him. A shot is fired, and goes wide. The man at the centre of the carousel controlling the motor is injured; the controls slip, the carousel starts going faster and faster; aboard the roundabout battle is joined, while underneath two men crawl inches below the spinning boards to reach the centre and stop the machine. 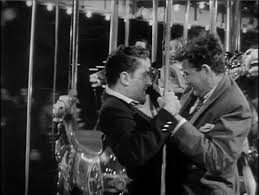 Familiar? It should be, it is in every detail the climax of Alfred Hitchcock’s film of Strangers on a Train.

Let’s be clear about this: Crispin’s novel was published in 1946; Hitchcock’s film came out in 1951 and was based on Patricia Highsmith’s 1950 novel of the same name. I don’t know if the fairground scene occurs in Highsmith’s novel, I’ve not read it. I rather suspect it might be Hitchcock’s invention, he had a fascination with fairgrounds that appeared in a number of his films. But either way, I think I know where the scene came from. Now Crispin had a familiarity with the British film world, under his real name, Bruce Montgomery, he wrote scripts and also composed the music for the earliest Carry On movies (as well, of course, as helping to found the British Science Fiction Association); it is probably no stretch to imagine that the film world also had a familiarity with Crispin. I don’t think Crispin’s influence on Hitchcock’s film is acknowledged, but it is surely there.

Anyway, I suspect I will be reading more of the Grevase Fen novels now.