I thought at the time, and still think, that Patrick Nielsen Hayden’s Starlight  was one of those anthology series, like Universe or New Dimensions, that the genre truly needs. Unfortunately, it lasted only three issues, which is our loss. This was one of the first reviews I did for The New York Review of Science Fiction. It appeared in issue 126, February 1999. 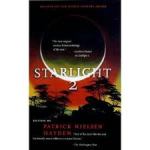 There is a tide in these things. A book receives high praise; the next in the series comes out, it gets panned. It’s not hard to see why: the editor or author may not quite sustain the pitch achieved the first time round. Meanwhile, the critic’s expectations have been raised by the response to the first volume, so anything that doesn’t actually improve on the first is going to seem like a falling off. Starlight 2 is on a hiding to nothing. The first volume received the sort of critical praise most editors would kill for, as well as garnering a World Fantasy Award for Patrick Nielsen Hayden not to mention a fistful of silverware for its contributors. I should be here to bury Starlight 2, not to praise it.

Okay, let us, Canute-like, buck the tide. Starlight 2 is excellent! More than that, Starlight 2 is the sort of anthology that science fiction desperately needs, driven by straightforward notions of good writing and good storytelling rather than squeezing stories into some preconceived thematic straightjacket. Of course, I have already applied a straitjacket by suggesting it is a science fiction anthology. It contains science fiction, yes, but it contains out and out fantasy also, as well as a couple of stories (perhaps the best in the book) that don’t readily fit into either camp.

If this variety is one of the attractions of the book, one should not expect uniformity of quality either. There are no bad stories here, but one or two appear rather dull when set beside the dazzle of their companions. ‘Lock Down’ by M. Shayne Bell tells what has already become an old story of time police protecting evil (or, in this instance, indifference) in order to preserve the true time line. Here the focus is a black opera singer in Utah in 1948 when a minor change in circumstances might have brought about a seismic upheaval in American race relations. It is nicely done, a neat study of how much depends on minutiae, but there are major moral questions here and Bell doesn’t even ask the basic one: what’s so great about the true time line if it means defending evil? There is a similar sense of questions not asked about the other (relatively) weak story in the anthology, ‘Snow’ by Geoffrey A. Landis. In fact, this is little more than a sketch: we are introduced to a woman living on the streets, forced into prostitution to afford a room for herself and her child when the snow starts falling. She escapes her circumstances by visiting another world inside her mind, which turns out to be the world of mathematics; and there, at the precise point that the story really begins, is where Landis brings it to an end.

Besides these two, however, the 11 other stories in the book would grace any collection. They range in subject from thoroughgoing science fiction, such as David Langford’s ‘A Game of Consequences’ in which the old warning not to mess with Nature gets a new lease of life in this juxtaposition of scientific research and childhood experimentation; to richly-imagined fantasy, such as ‘The End of a Dynasty’ by Angelica Gorodischer (in a very appealing and readable translation by Ursula K. Le Guin). In this extract from a novel an irascible, buttonholing storyteller recounts how a prince brought up in a suffocatingly over-prescribed society learns to make the crucial break with tradition and at the same time discovers the truth about his parents, the whole thing told with a vivacity and vigour that leaves this reviewer at least wondering whether the full novel could possible sustain this pace and style, and hoping against hope that it does.

Nowadays it seems almost de rigeur that every new sf collection must contain at least one self-referential story about science fiction, and here we get ‘Divided by Infinity’ by Robert Charles Wilson in which the chance discovery of science fiction novels that were never written sets the scene for a haunting clash between what we might lose in life and what we might gain in immortality. At the end, Wilson’s story steps outside its own narrow bounds and in so doing loses a little of its impact, which may be a problem also with Esther M. Friesner’s ‘Brown Dust’. This meticulously detailed and compassionate account of life among the street children of Rio as they are hunted down by extermination squads undergoes a sudden change of pace about two-thirds of the way through when a child with burgeoning psychic powers meets one of the hunters with the same powers. Friesner almost loses it here, with a magical ending that feels as if it has been imposed on the story rather than growing organically out of it. At least, however, her plot reaches a conclusion, which is more than can be said for Jonathan Lethem’s ‘Access Fantasy’. Lethem is clearly most interested in writing about a world in permanent gridlock, and about the privileged who live separated from the hoi polloi in their cars; but to give his story some slight dynamic he gives it a whispily insubstantial murder plot, then runs away from its resolution just as his protagonist does. What is most irritating about what is otherwise an effective piece of description is that Lethem has indulged in a rather pointless stylistic experiment, writing the whole piece in one unbroken paragraph. It is pointless because it affects the rhythm of the story not one iota, one still reads it with the paragraph breaks as they should appear. Ellen Kushner tells her story, ‘The Death of the Duke’, in a much simpler, more traditional manner, and it is the more effective for it. Set in the same world as her first novel, Swordspoint, it tells of an infamous Duke who returns home to die and finds his nurse brings memories of his youth. It is a gentle story about ungentle characters, and is beautifully done.

Balancing these established novelists, Hayden has chosen stories by three writers who have already established reputations for themselves though they have so far published only short stories. To be honest, I felt that both Susanna Clarke and Martha Soukup fell slightly below the high level they have previously established. Clarke’s ‘Mrs Mabb’ is the old tale of the witch-goddess who can make a year seem but a night. Here the tale is dressed in Regency manners and told well, but does not add a great deal that is new to the original model. In ‘The House of Expectations’ Soukup again considers sexual desire, but in a far more obvious and straightforward way than usual, and the odyssey through this unusual brothel seems to demand more from its ending than the slight science-fictional twist gives it. However Ted Chiang, returning to writing after a break of some years, is clearly at the peak of his form with what is surprisingly only his fourth published story. ‘Story of Your Life’ is a story of an alien visitation that could easily add to his haul of the genre’s medals. Its heroine is a linguist brought in to try to understand the language of the aliens who have suddenly appeared in Earth orbit. Chiang recounts in convincing detail the slow halting quest for comprehension, and then shows how the structure of their language reflects a very different way of apprehending the world. As our heroine cracks the code she finds her own perception of the world undergoing a radical twist, including being able to foresee in sharp and at times heartbreaking detail the entire life and death of her own as yet unborn daughter.

It is easy in a review such as this — when one must perforce pass over individual stories only briefly in order to give some flavour of the anthology as a whole — to pick out problems or weaknesses in the stories and hence give them undue emphasis. I must repeat, therefore, that the general standard of stories in Starlight 2 is very high indeed, and a couple (I am thinking particularly of those by Ted Chiang and Angelica Gorodischer) would be dazzling in any other company. But even these pale beside two stories that are, frankly, about as good as it gets. Raphael Carter’s ‘Congenital Agenesis of Gender Ideation by K.N. Sirsi and Sandra Botkin’ is barely a story, but rather a scientific paper delivered by Sirsi and Botkin, and presented straight. Science fiction, I have been told for as long as I have been reading the stuff, is a literature of ideas; but the literature, of course, allows us to fudge the ideas. How could it not, for sf is not science, we do not turn to sf for rigorous analysis and experimentation, rather we look to find basic human dramas played out against a backcloth of some novelty, whether the ideas that constitute that novelty are rational or hare-brained or anywhere in between. Nevertheless the quest for understanding that is the stuff of science is itself a drama, and Carter has taken a paper that, in other circumstances, might have appeared in Nature, and allows us to glimpse the story and the changing worldview that lie beneath its surface. What begins as a study of a learning disorder turns into a revelation about the nature of gender and, beyond that, about how unreliable our knowledge of the world is.

Against the strict scientific method that more tightly controls Carter’s story than just about any other sf story, Carter Scholz’s ‘The Amount to Carry’ is fragile and tenebrous and defies any attempt to define it. It takes as its starting point the fact that in the early years of this century author Franz Kafka, poet Wallace Stevens and composer Charles Ives all worked in insurance. Scholz brings them together at a conference, but he does not take the easy option of simply having them meet, in fact the three barely connect. Rather the hotel that is the setting for the conference is, as we slowly discover, Gormenghastly in its size and complexity, and in this vast and ever-changing setting each man finds an echo for his moods and attitudes, moods and attitudes that range from Ives’s simplistic optimism to Kafka’s despair yet which all have a metaphorical link to insurance. The three men glance off each other tangentially, yet somewhere in this network of not-quite relationships each finds something that relates to their work and each finds, also, a metaphor for the twentieth century. This is not the sort of story that is likely to win awards, it is too shadowy for that, but it is a haunting and in the final analysis a grand story for all that.